Nestbuilder.com Corp (OTCMKTS: NBLD) rocketed up from under $0.05 to highs of $0.93 on Thursday after the Company announced the reverse merger with Renewable Innovations, Inc. (RI), a leader in clean, hydrogen fuel cell energy systems, whereby RI will be the surviving Company. Reverse merger stocks are among the most explosive stocks in the public markets, especially in small caps and NBLD has been no exception so far.

Nestbuilder.com Corp (OTCMKTS: NBLD) is a very clean fully reporting SEC filing OTCQB Company with $100,000 in the treasury and is virtually debt free with a total of $99k in accounts payable and accrued expenses in total liabilities. According to the Company’s 10k “We were incorporated in the State of Nevada on January 10, 2017 as a wholly owned subsidiary of RealBiz Media Group, Inc., a Delaware corporation (“RealBiz”). On July 31, 2018, RealBiz effectuated our spin-off from RealBiz. Upon completion of the spin-off, RealBiz stockholders owned 100% of the outstanding shares of our common stock.

Since inception the Company was engaged in the business of providing digital media and marketing services for the real estate industry. In addition, the Company owns and operate the web site LoseTheAgent.com, which is a site dedicated to peer-to-peer real estate transactions between home sellers and buyers – the so called For Sale By Owner segment. At one point, the Company had approximately 100,000 home listings across all 50 states. 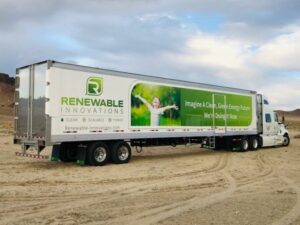 Renewable Innovations shareholders will retain ninety-three percent (93%) of the publicly traded entity, which has been renamed Renewable Innovations, Inc. The Company intends to leverage its breakthrough hydrogen fuel cell technology, bringing grid independent, clean, renewable solutions for power generation and sustainability to the market. Plans include expansion into retail power distribution, especially along the US highway system through organic growth and acquisitions. Currently, the company is in production on orders for government and private company projects. Renewable Innovation’s integration technology allows for rapid charging of a vehicle in under 20 minutes, offering a significant time savings over current EV charging portals. Since the hydrogen-fueled systems require no grid infrastructure, they can be provisioned anywhere that rapid, carbon-free power is needed.

“With the global focus and increased investments on sustainable and clean energy solutions, this is the perfect time to bring our proprietary technology to the public markets,” noted industry veteran Robert Mount, CEO of Renewable Innovations. Alex Aliksanyan, CEO of Nestbuilder added “We are excited to be partnering with Renewable Innovations, a first in class, hydrogen based, electric power product manufacturer. We see a limitless future for the company.” 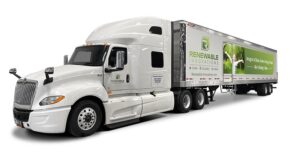 Renewable Innovations, Inc. will continue to trade on the OTCQB marketplace maintained by OTC Markets Group, Inc. under the symbol “NBLD” until such time as FINRA approves the name and symbol change. The Company intends to file for a listing on NASDAQ as soon as it is eligible.

They also filed an 8k stating that:

In connection with the Merger, we filed articles of merger with the Nevada Secretary of State to change our name to Renewable Innovations, Inc. pursuant to a parent/subsidiary merger between us (as “Nestbuilder.com Corp.”) and our wholly-owned non-operating subsidiary, Renewable Innovations, Inc., which was established for the purpose of giving effect to the name change.

In connection with the closing of the Merger, the following changes to the Board occurred on December 1, 2022 (the “Closing Date”), which will result in a change of a majority of the members of the Board:

Our goal at Renewable Innovations is to accelerate the growth and opportunities within the renewable economy. Our team of industry leaders brings extensive experience and invaluable connections across the Renewable, Hydrogen, and Alternative Energy sectors. Along with our partners, investors, and clients, we are making major technological advancements with products and solutions to lead the world into a new and exciting carbon-free future.

Welcome to the future of clean, scalable power with Renewable Innovations.

To accelerate our growth and the transition to a green zero-carbon future, Renewable Innovations is now a public company. For nearly a decade, we’ve been imagining, designing, and building hydrogen-powered systems to bring green, clean solutions across industries, particularly the EV charging market. Our EV Charging Systems deliver rapid charging of an EV in under 20 minutes, offering a significant time savings over current EV charging portals. Since the hydrogen-fueled systems require no utility grid infrastructure, they can provide Green scalable power ANYWHERE rapidly for facilities, for ports, for critical operations, and for Rapid EV charging.

Renewable Innovations is accelerating the growth and opportunities within the renewable economy. Our team of industry leaders brings extensive experience and invaluable connections across the Renewable, Hydrogen, and Alternative Energy sectors. Along with our partners, investors, and clients, we are making major technological advancements with products and solutions to lead the world into a new and exciting carbon-free future.

Every day, we’re moving one step closer to a clean, green economy powered by a new energy infrastructure!

These are just a sample of the applications where Hydrogen Fuel Cell technology is solving the environmental and capacity problems — all significant steps toward our goal of a zero-carbon future.

DETROIT – GM continues to accelerate its growth as a platform innovator and announced today new commercial applications of its HYDROTEC fuel cell technology. HYDROTEC projects, which are currently in development, from heavy-duty trucks to aerospace and locomotives, will now be used beyond vehicles for power generation.

These fuel cell generators could ultimately replace gas- and diesel-burning generators with fewer emissions at worksites, buildings, movie sets, data centers, outdoor concerts and festivals. They could also back up or temporarily replace grid-sourced electricity for residential and small commercial enterprises at times of power disruption.

Each of these HYDROTEC-based power generators feature zero emissions’ electric power generation output ranging from 60 kilowatts to 600 kilowatts, along with low noise(1) and heat signatures(2).

“Our vision of an all-electric future is broader than just passenger vehicles or even transportation,” said Charlie Freese, GM executive director of the global HYDROTEC business. “Our energy platform expertise with Ultium vehicle architectures and propulsion components and HYDROTEC fuel cells can expand access to energy across many different industries and users, while helping to reduce emissions often associated with power generation.”

GM is supplying HYDROTEC fuel cell power cubes to Renewable Innovations of Lindon, Utah to build the Mobile Power Generator. GM will combine its fuel cell hardware and software with Renewable Innovations’ power integration and management systems to create a generator that can provide fast-charging capability for EVs without having to expand the grid or install permanent charging assets in places where there’s only a temporary need for power.

Multiple development projects involving the MPG are already in process, including a  demonstration of the technology as a mobile charging station for EVs funded in part by the Michigan Economic Development Corporation and the U.S. Army Combat Capabilities Development Command Ground Vehicle Systems Center. This version of the MPG is expected to first be demonstrated in mid-2022.

“As pioneers and innovators in the hydrogen power space, Renewable Innovations sees exciting opportunities across consumer, business, government and industrial markets,” said Robert Mount, CEO and co-founder of Renewable Innovations. “We’ve seen that there’s a need for EV charging in places where there’s no charging equipment, and now we’re committed to bringing the best technology and game-changing applications to market with GM to accelerate the company’s vision of a zero emissions future.”

The California Energy Commission is funding a separate demonstration program of four additional MPGs through its Mobile Renewable Backup Generation systems program to show how hydrogen-based mobile power can help offset the loss of energy during the planned power shutoffs used to mitigate wildfires throughout the state.

This demonstration is being led by the Electric Power Research Institute, the preeminent independent, non-profit energy research and development organization, collaborating with stakeholders like GM and Renewable Innovations to ensure the public has safe, reliable, affordable and equitable access to hydrogen-generated electricity.

EMPOWER rapid chargers can be installed at existing fuel stations or along corridors frequented by travelers only part of the year, such as national parks or vacation destinations.

The EMPOWER rapid charger, powered by eight GM HYDROTEC power cubes, consumes hydrogen from internal tanks and can DC fast charge as many as four vehicles simultaneously starting at 150 kW with a target full charge time of 20 minutes. More than 100 EVs can be charged by the EMPOWER rapid charger before the unit needs to be resupplied with hydrogen.

Renewable Innovations plans to deploy 500 EMPOWER rapid chargers across the country by the end of 2025.

GM designed a separate, palletized version of the MPG which is now being evaluated by U.S. Army Combat Capabilities Development Command Ground Vehicle Systems Center (GVSC).  GVSC is also exploring how this version of the MPG can power heavy-duty military equipment and camps. This prototype is equivalent in size to a 60-kW generator and produces nearly 70 percent more power than traditional diesel generators. This MPG variant also contains features not typically found on diesel generators, like battery backup and output regulation.

Powered by a HYDROTEC power cube, this MPG prototype converts offboard, bulk-stored hydrogen to electricity generated with no emissions in operation. It generates less noise than a conventional diesel engine at full load and emits water which can be captured and  repurposed in the field.

GM will produce HYDROTEC power cubes at its Fuel Cell Systems Manufacturing joint venture with Honda in Brownstown, Michigan. Renewable Innovations will produce the trailer-based MPG and the larger, modular EMPOWER rapid charger at their facilities in the Salt Lake City metro area.

General Motors (NYSE:GM) is a global company focused on advancing an all-electric future that is inclusive and accessible to all. At the heart of this strategy is the Ultium battery platform, which powers everything from mass-market to high-performance vehicles. General Motors, its subsidiaries and its joint venture entities sell vehicles under the Chevrolet, Buick, GMC, Cadillac, Baojun and Wuling brands. More information on the company and its subsidiaries, including OnStar, a global leader in vehicle safety and security services, can be found at https://www.gm.com.

About Renewable Innovations – Our goal at Renewable Innovations is to accelerate the growth and opportunities within the renewable economy. Our team of industry leaders brings extensive experience and invaluable connections across the Renewable, Hydrogen, and Alternative Energy sectors. Along with our partners, investors, and clients, we are making major technological advancements with products and solutions to lead the world into a new and exciting carbon-free future. 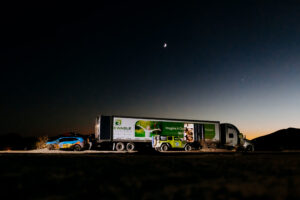 Note: We have not been compensated for this article

Sign up now for our 100% FREE Penny Stock Newsletter